During our time in Osaka, we decided to take a day trip and we had quite an ambitious plan for our day. First, we would be catching a bullet train to Hiroshima. On our trip to Japan, I generally held the position of Tour-Guide-In-Chief. My Dad and brothers were keen explore the country but didn’t really have any particular sites in mind. This worked quite well because – even though I don’t always like being in charge – I had quite the to-do list. Hiroshima, however, was one place that my Dad and brothers were pretty set on, and that wouldn’t be our only stop. Between Osaka and Hiroshima is the city of Himeji, home to a very famous castle, so we planned to stop off there on our way back.

The journey to Hiroshima was very easy – I think about an hour and a half. We arrived at the station, grabbed a cup of coffee and decided to walk the distance to the Peace Memorial Park – the site we were here to see. It was about a half hour walk and, although we could have tried to get a taxi/public transport, we figured this way we’d get to see more of the city. 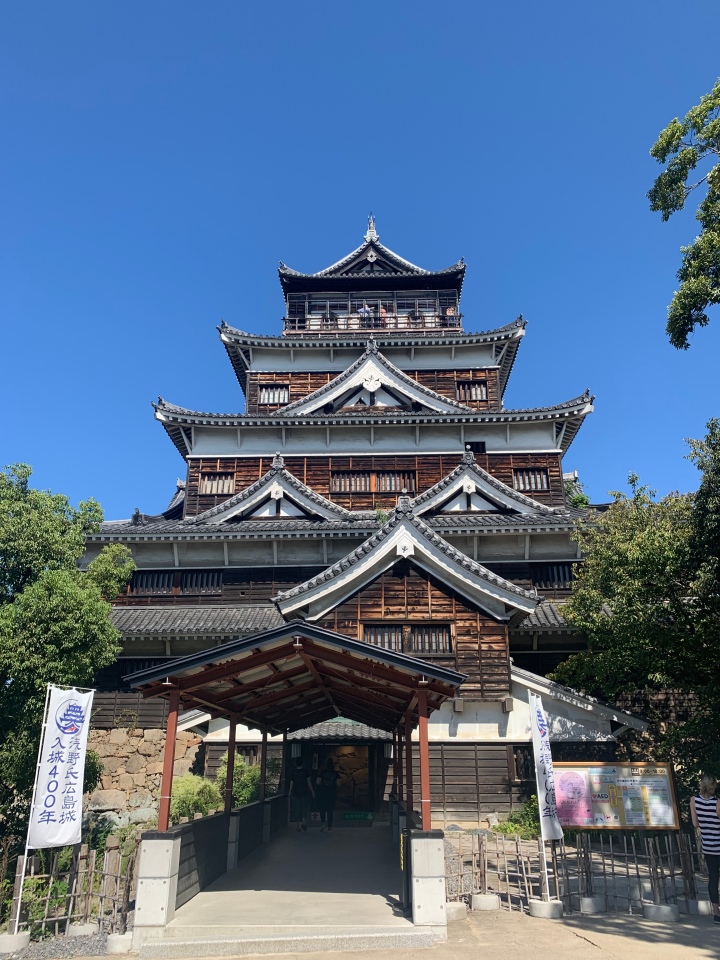 Unsurprisingly, given the fact that Hiroshima was destroyed by an atomic bomb and had to be extensively rebuilt, the architecture of the city was not particularly picturesque. It felt more industrial and concrete and the place felt a lot quieter than the other cities we’d been to. However, as we walked, we came across Hiroshima Castle, which was also destroyed in the attack and had to be rebuilt. I didn’t know anything about Hiroshima Castle but it was beautiful. Something about it reminded me of a Christmas gingerbread, covered in white icing. It was also set in a park surrounded by a moat filled with koi carp.

We hadn’t factored a stop at Hiroshima Castle into our day and so had to keep going but I would have been interested to explore the museum inside.

We kept walking until we came to the Atomic Bomb Dome. Before the bomb, this building was known as the city’s Prefectural Industrial Promotion Hall. Unlike the buildings around it, the structure – although being severely damaged – withstood the blast as the bomb itself exploded right above it. Now it has been designated as an UNESCO World Heritage Site and left as a memorial.

The dome stands on the edge of the Peace Memorial Park, where we continued to walk around. We soon came to the Children’s Peace Monument – which stands as a memorial to the children whose lives were lost. There was a class of school children visiting the site and singing a song in tribute, so we stood for a while and watched.

We continued to explore the park and the various monuments and places of remembrance set within. We passed a lot of groups of school children, many of whom stopped us as we walked. It seemed they were there both to visit the memorial itself and to practice their English on the tourists who would inevitably be there. They all had their set list of questions and asked us to sign their books when our conversations were over.

We spent a little while in the park and then had to make a decision as to what we were going to do next. The park is also home to a museum which would have been very poignant to visit, however, we had scheduled a lot into our day and were conscious that Himeji Castle would close at 4pm. We knew timing was already tight but figured we’d at least be able to see the castle from the outside if we arrived too late to go inside. 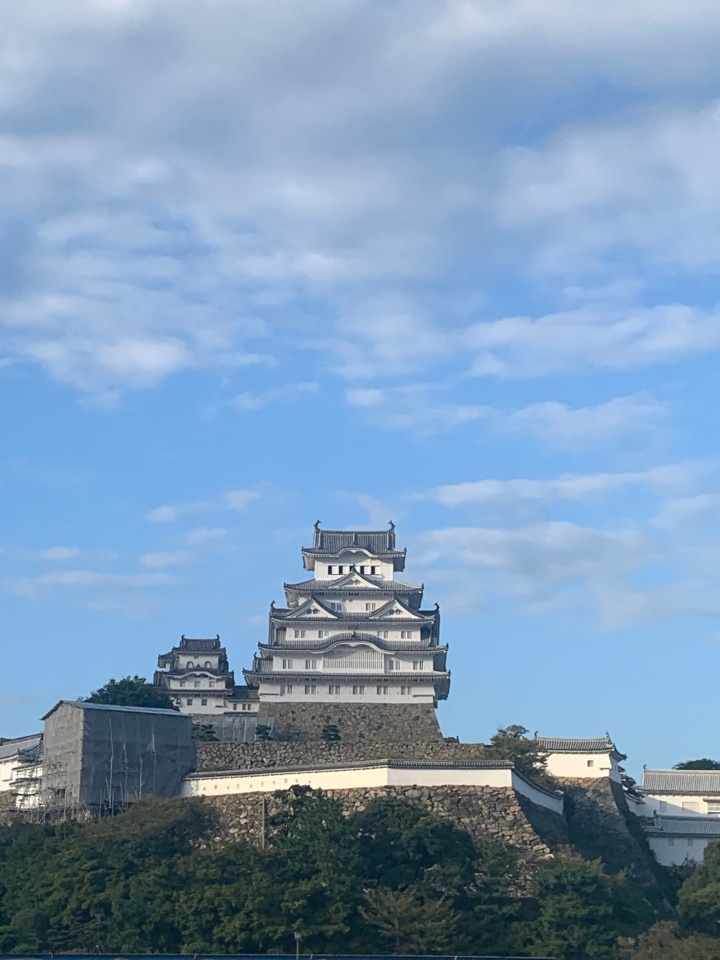 We decided we needed to head off (a decision which we now realise was a mistake). We took a bus back to the train station but had to wait a while until the next train. By the time we actually arrived in Himeji, we had indeed missed the 4pm closing time for Himeji Castle, however the surrounding Sannomaru Park was still open so we ventured inside. 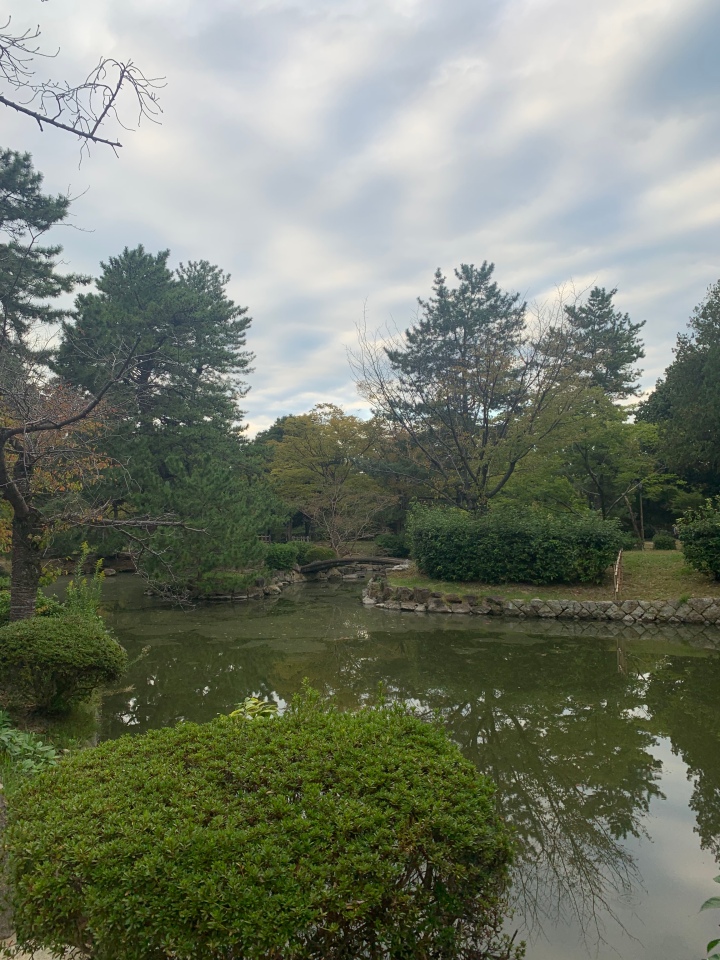 We were disappointed to find that, unlike Osaka Castle and Hiroshima Castle, we weren’t able to get right up close to Himeji Castle without paying an entrance fee (during open hours). We could see it but we wanted to see more. We walked around the perimeter to see if we could get any better views around the back but unfortunately we could not. I did, however, enjoy the fact that Auld Lang Syne was being played by the entrance.

It was an impressive castle, even from a distance, so I was glad that we saw it, but we had messed up a little. Given that Hiroshima’s Peace Memorial Museum was open until 6pm, what we should have done is stopped off at Himeji Castle first. We should have aimed to get there as close to 9am (when it opened) as we could, whizzed round, hopped back on a train (having found out train times beforehand so we didn’t just miss one) and then headed down to Hiroshima and visit the memorial park and museum. Either that or saved Himeji Castle until the next morning and headed all the way back to Tokyo after but, given there was an incoming storm, going back to the castle the next morning didn’t seem like the most sensible idea.