I’ve known my flatmate for nearly two years now and for the majority of that time she has been suggesting a trip to Poland – where she’s from. Finally, we picked a weekend to go with some other friends from work. We initially planned a trip to Krakow, which is not where she is from but is where her mother lives. However, inexplicably, flights doubled within the space of a week and so instead we booked a trip to Warsaw. We headed off on a evening flight from Stansted, set to return on Sunday. 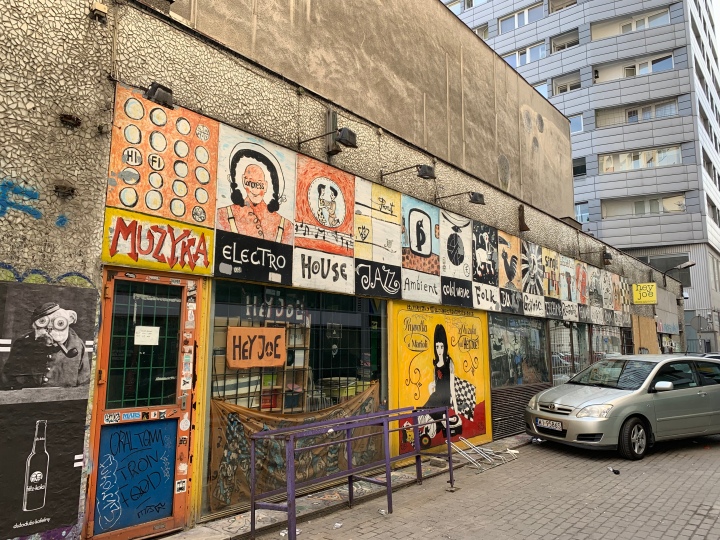 It was a surprisingly quick flight and an easy Uber ride from the airport to our Airbnb in the middle of town but it was still relatively late when we arrived. That was ok though because we only had one destination in mind for our first night in Poland: KFC. Now I know that does not sound particularly cultural but, if there was one thing I learnt from my 6 months living in Romania, it is that KFC is so much better in CEE than it is in the UK. It’s fresher, meatier and more delicious-er. Happily there was a KFC within walking distance of where we were staying so it was not long at all before we were tucking into some chicken (and it entirely lived up to my memories of it). 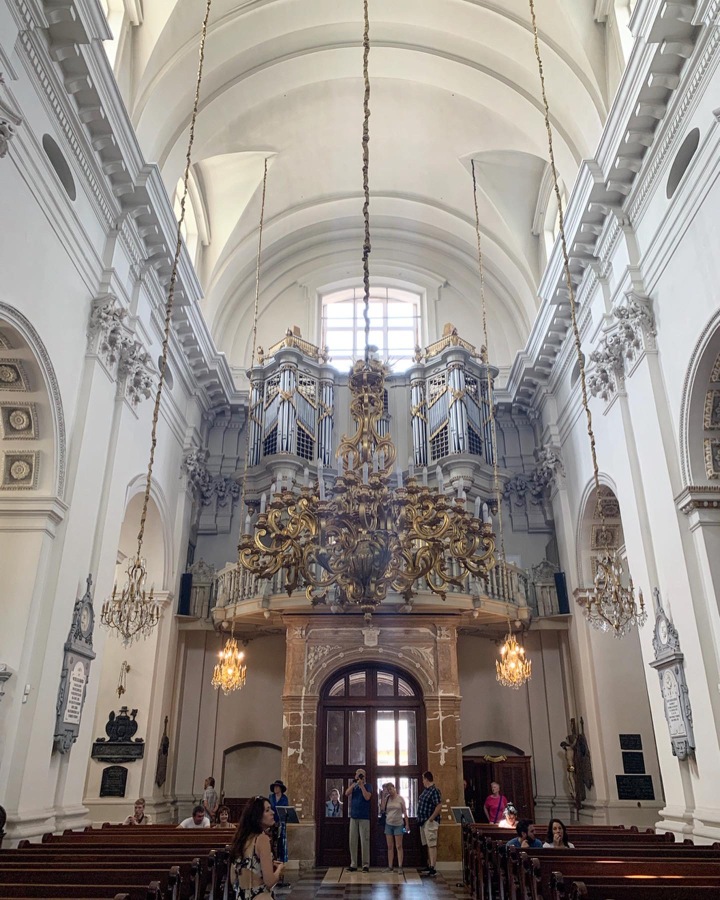 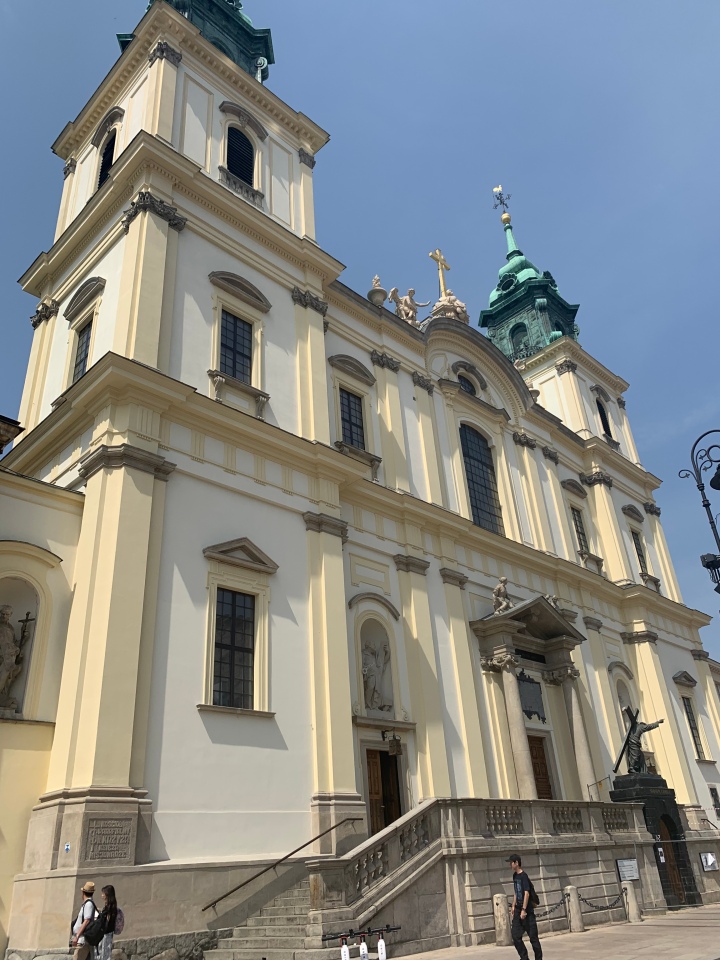 The next day we did something indisputably cultural: we explored. Our Airbnb was close to the Palace of Culture and Science and we walked from here into the Old Town, where my friend showed us the very pretty university where she used to study and we explored beautiful churches (like the Holy Cross Basilica, Carmelite Church, Visitationists Church and St. John’s Archcathedral), admired the architecture (like the Presidential Palace, the Copper-Roof Palace and the tall, colourful buildings that line the Old Town), wandered down cobbled streets and ate ice cream in Castle Square in front of Sigismund’s Column and the Royal Castle. 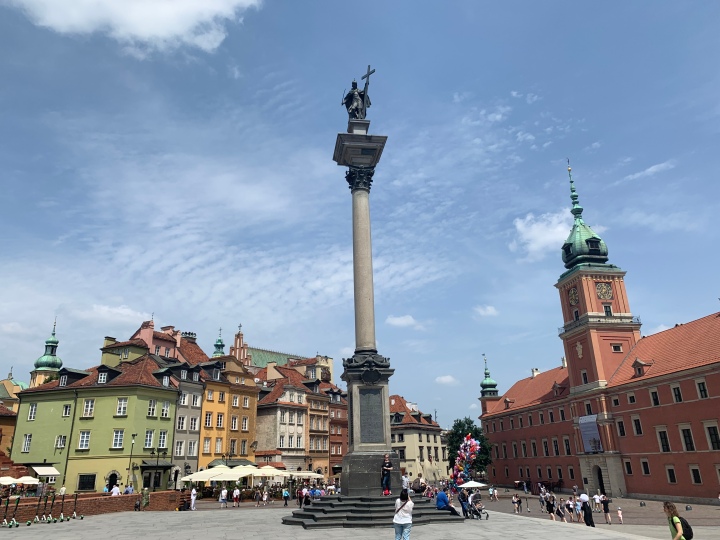 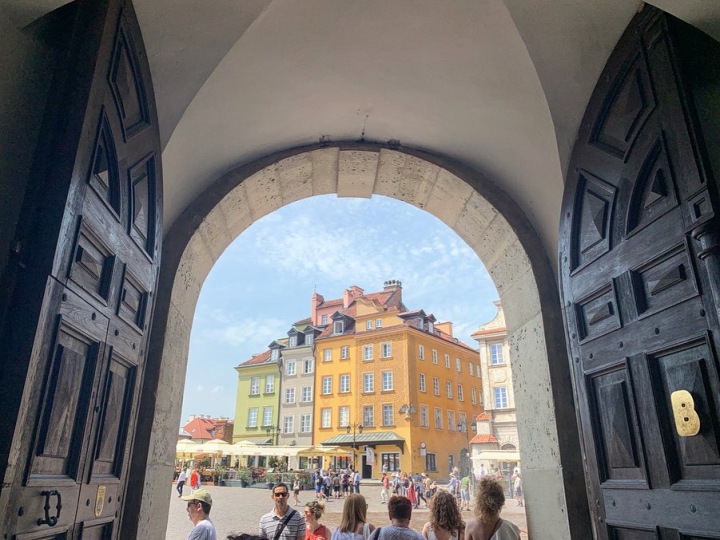 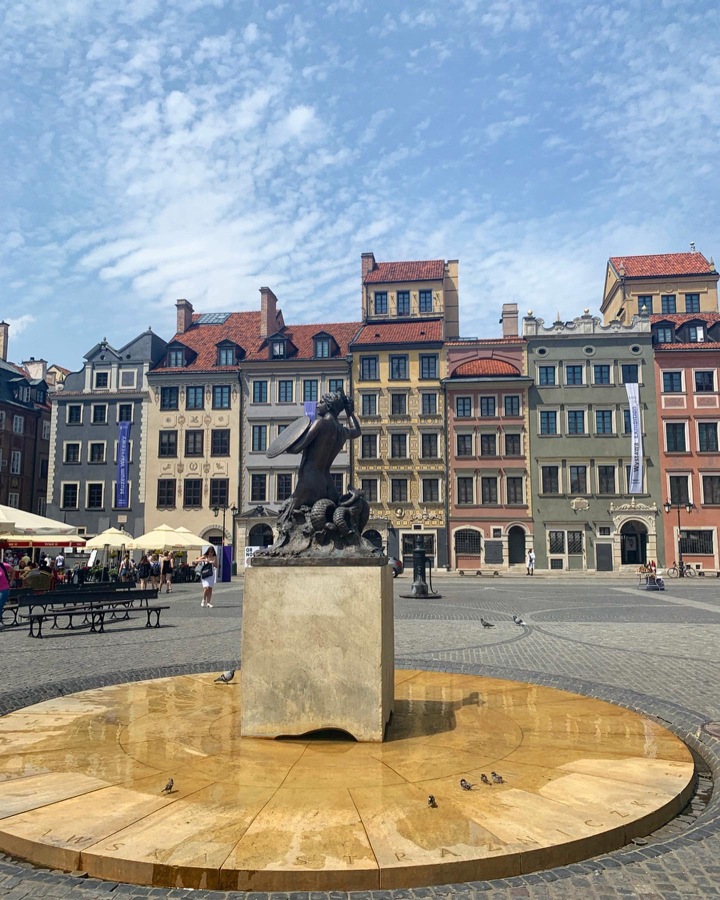 We stopped for a break from our strolling in Warsaw’s Old Town Market Place (Rynek Starego Miasta), with it’s little mermaid statue (little as in small, not little as in Hans Christian Anderson), and had a non-alcoholic beverage at a restaurant called Rynek, before continuing on our way. We ended up down by the River Vistula. Here we found the Vistulan Boulevards, lined with bars and restaurants in old shipping containers. We ventured into one and found an American diner which wasn’t exactly what we wanted and so instead we tried another – Bar Mleczny Syrenka – which turned out to be the Polish option we were looking for. I ordered goulash – my favourite CEE meal – so I was happy. 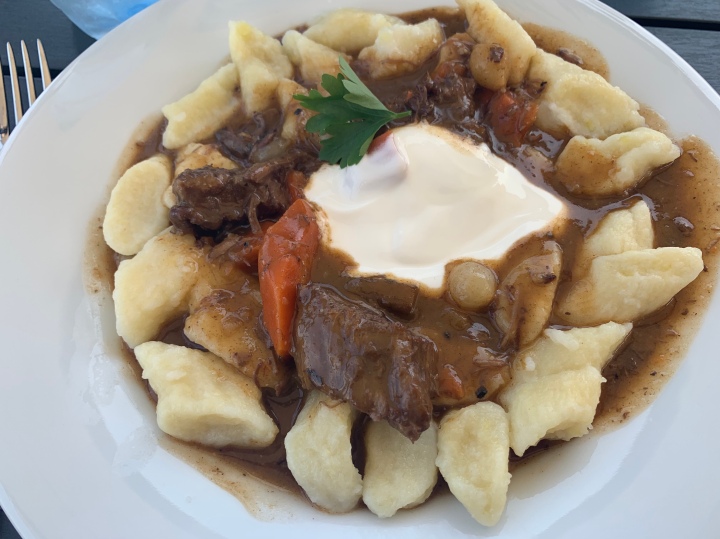 We continued along the boulevard until we came to the next sight we were on the lookout for – the big statue of the Mermaid of Warsaw – the city’s symbol. Not far from here we found what was to be our next, albeit unexpected, activity. As it turned out Warsaw was full of what were basically scooters’ answer to Uber. All over the city were these electric scooters and you could download various apps to unlock them, rent them out and ride them around. I’ve since found out these are a thing in many places but since London is not one of them (although I have noticed more people on electric scooters since) they had a certain novelty factor that kept us very entertained.

We rode our scooters over to the beautiful Royal Baths Park, home to places like the Myślewicki Palace and the Palace on the Isle. Unfortunately we were not allowed to take our scooters into the park so we had to bid them goodbye by the gates. Once inside, we found the palaces, a big lake, statues, a peacock and an excellent opportunity for a Instagram photoshoot. It was the perfect place to end today’s sightseeing tour. 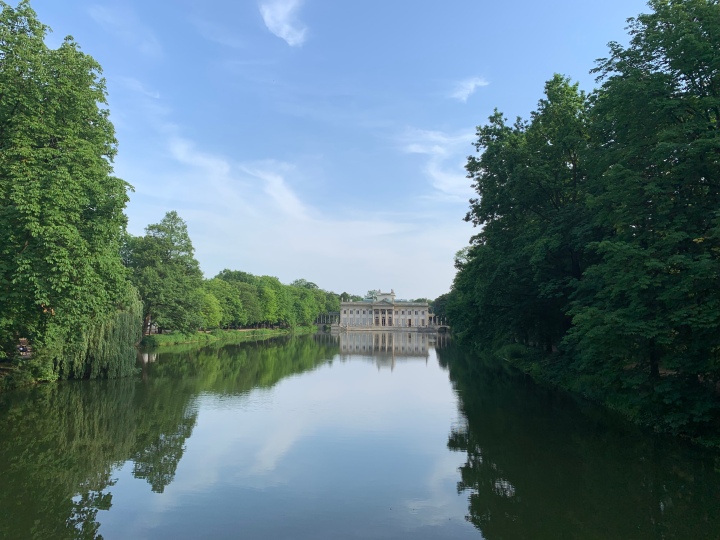 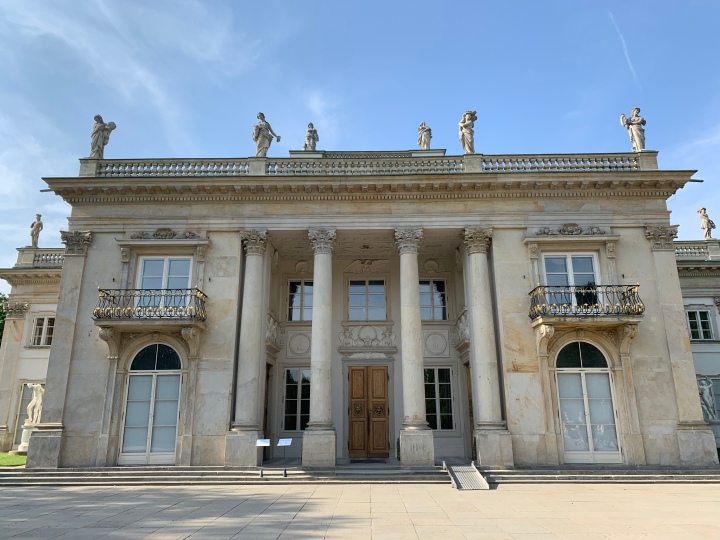 From the park, we ordered an Uber back to our Airbnb. It took us a while to find an Uber that could actually find us but once we did it wasn’t a long ride home. We spent a while getting ready (which in my case involves less time putting on make up and more time napping) before getting another Uber – this time back to the Old Town.

We didn’t have a dinner destination in mind, we were just going to walk until we found somewhere that sold dumplings (which my friend told us we needed to try) and find somewhere we did. Gosciniec Polskie Pierogi to be precise, where we shared an array of savoury fried and boiled dumplings (delicious) to start. I then ordered some savoury pancakes for my main and was given the option of having them with tomato sauce or bechamel by the waitress. I panicked on the spot and made the mistake of going for the latter and so I didn’t enjoy these as much as the dumplings but you can’t have everything. 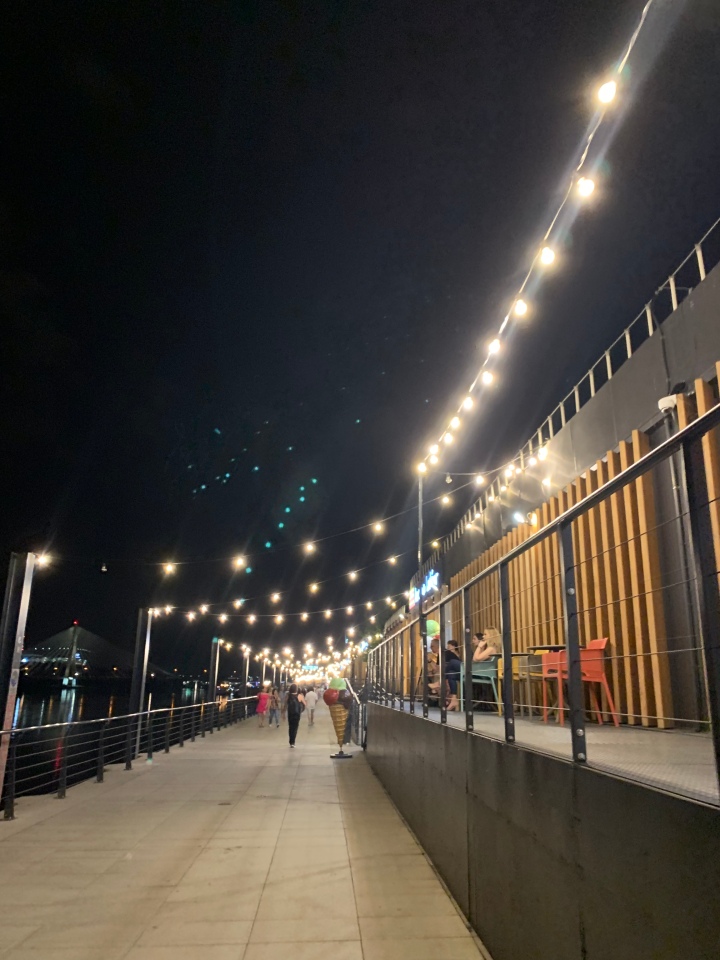 Our intention was for Saturday to be a Big Night Out so we headed back to the Vistulan Boulevards, to a beach bar we’d passed earlier (but I think you can guess from the word “intention” where this is going). At the bar, we found a DJ and lots of people dancing. Sadly, however, we did not end up joining them. We were full and we were tired. Although there were dancey-vibes, the place was also quite chilled, with a lot of people just sitting around with drinks. These people we joined (and when I say joined, I mean we sat in our own little group in a space amongst them, not interacting) but just for one. We then ordered an Uber to take us for a fancy drink at the Panorama Sky Bar at the Marriott Hotel, with views of the Palace of Culture and Science. Somehow we made it to bed without even a hint of vodka.

The next morning we had to check out of our Airbnb but we weren’t catching a flight until later so we walked the short distance to the main railway station and dumped our bags in the lockers there. We then picked up some scooters (after a bit of trial and error after the first load we found were out of battery) and headed in the direction of the Old Town to the historical A.Blikle Cafe for breakfast. Due in part to the fact that I wanted to be cultural but also to the fact that I wanted something savoury but also to make the most of the bakery’s sweet treat offerings, I ordered the “Polish breakfast” which consisted of scrambled eggs, ham, tomatoes, jam, butter, sour cream/cottage cheese (I forget which) and… a doughnut.

Unfortunately, whilst we had been eating, someone had picked up our scooters. Thankfully, we didn’t have to walk far to find some more. We scooted back into the Old Town but hit a snag when we realised scooters and cobbles do not mix. We ended up walking our scooters around a bit until we found a pavement based route that took us passed the old city walls and down to the Multimedia Fountain Park. This was a less enjoyable ride than our breezy jaunt yesterday along the river and wide pavements to the Royal Baths Park as the pavements here were bumpier and there was a certain amount of steep downhill sections that could have ended badly. The Multimedia Fountain Park, however, was quite cool but not nearly as exciting as it sounds and there wasn’t much to keep us there long.

Instead we zipped off back in the direction of the Palace of Culture and Science. We planned on going inside and up to the viewing platform (again from the word “planned” you can probably see where this is going) and so tried to leave our scooters out the front. However, it turned out that you are not allowed to park scooters anywhere around the city and the app wouldn’t let you lock the scooter in a non-parking zone. We tried to leave our scooters in the park nearby but the app wouldn’t let us finish our rides here. Unfortunately it did lock my scooter anyway, so the app (and charge-o-meter) wouldn’t stop running but I now couldn’t move my scooter without an alarm screaming. Now if there is one thing that winds me up very quickly it is inadequate technology so I kept my friends quite entertained as I insulted my scooter. Thankfully, it turned out we were very close to a parking zone so I didn’t have to drag the screaming thing far before I could shut off the app and run away.

Another problem, however, then presented itself. The Palace of Culture and Science was not small. It had several entrances and for the life of us we couldn’t find the right one for the viewing platform. Considering time was now ticking on and we had a train and a plane to catch, we decided to admit defeat and just bid farewell to Warsaw.

One thought on “A Weekend in Warsaw”