After my latest trip in February this year, I have now been to Paris a whole three times – only two of which I actually remember since the first time I was 11. Despite multiple visits, I have yet to do anything that’s particularly off the tourist trail but since I’ve loved my visits to Paris I’m going to share my incredibly touristy activities anyway.

My trip up the Eiffel Tower is the only thing I really remember from my first visit to Paris (apart from some hazy memories from inside Notre Dame). I was away with family and friends and us kids got harassed for a while by people trying to sell tacky souvenirs around the base of the tower whilst our parents were off getting tickets for us to go up. We all ended up with some flour-filled balloons with faces on drawn on them and wool for hair which mostly all fell apart by the time we went up and made it back down again. Between playing with and breaking a balloon face filled with flour, I also remember there being some pretty amazing views of Paris below. It’s night light show, which looks like hundreds of camera flashes going off, is also pretty impressive. 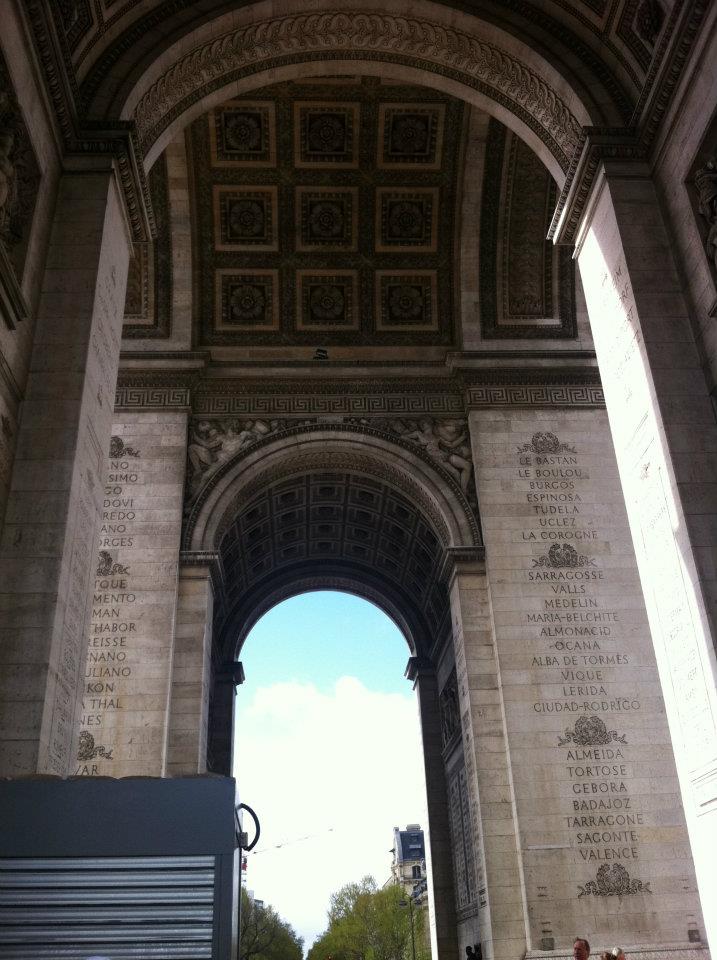 The problem with the views of Paris you get from the top of the Eiffel Tower is that they are missing one iconic landmark: the Eiffel Tower. Thankfully, Paris isn’t short of view-bequeathing-landmarks. The Arc de Triomphe isn’t just a landmark that can be appreciated from ground level, if you’re willing to climb the long spiral staircase inside you can also experience it from the top and here you can find city views that include the Eiffel Tower. 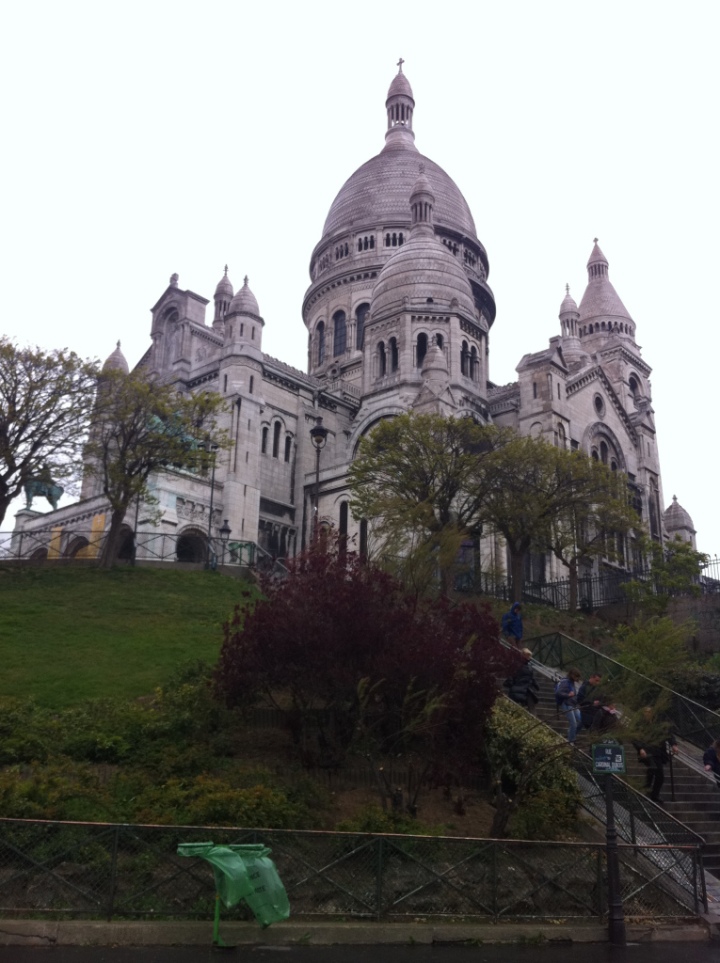 Following the theme of views, Sacre Coeur is next on the list. The church is set on top of a hill, looking over the district of Montmartre, and here you can find even more city views, although again I had to climb many stairs to get to them. The inside of the basilica is worth seeing as well. It is a beautiful building, with exquisite art and a domed ceiling that would have provided ample photo opportunities, if only visitors were allowed to take pictures inside. 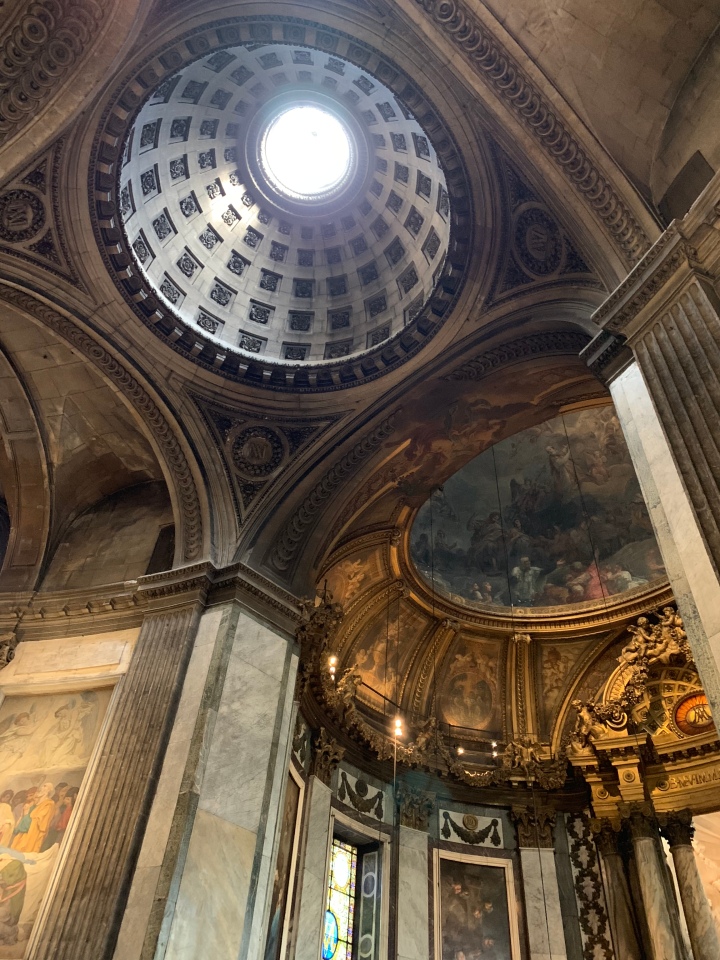 I stumbled across the Church of Saint-Sulpice while on the hunt for macarons from Pierre Herme (keep reading). After Notre Dame, this church is the second biggest in Paris and it is also infinitely quieter and less full of tourists (so actually a less touristy option on this list). Considering the fact it is also beautiful, this definitely makes it worth a visit. 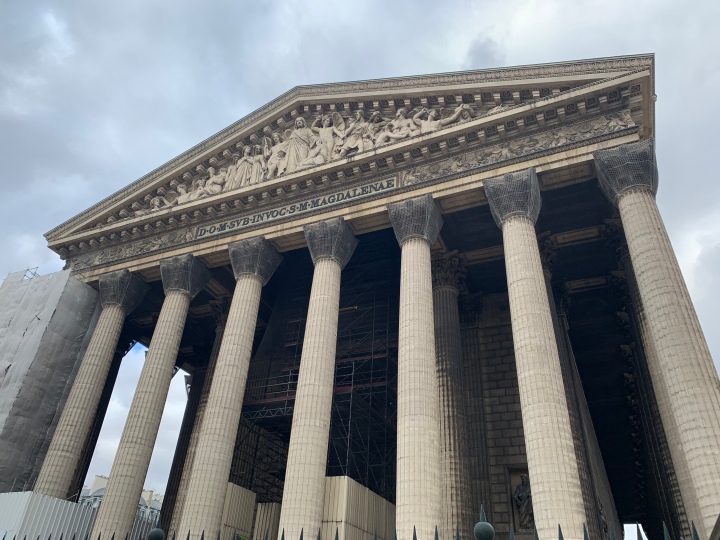 Paris is not short of beautiful churches and Madeleine Church is another one of them – again this is a less tourist-filled option than Notre Dame or Sacre Coeur. Like all of the above, it is a Catholic church on the inside but from the outside it looks more like an ancient Greek temple and indeed it was originally designed as a temple dedicated to Napoleon’s army.

The Place de la Concorde is a square that sits between the Champs Elysees, the Rue Royale and the Tuileries Gardens. It’s home to an Egyptian obelisk, flanked by two monumental fountains. The obelisk once lived at Luxor Temple before it decided to move to Paris – at the request of the Egyptian government. 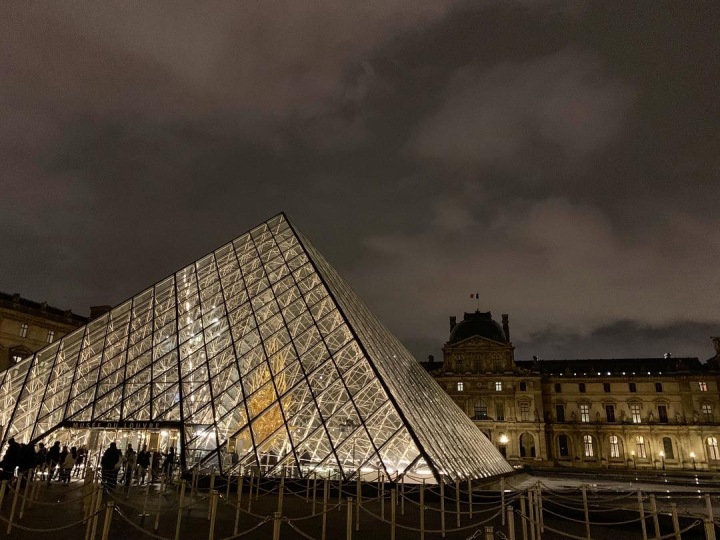 The Louvre hardly needs an introduction. It’s the largest art museum in the world and if you want to see all of it then this can easily take you more than a day to do so. I’ve visited twice – the first time looking at the ancient Greek, Roman and Egyptian artefacts, with a detour to see the museum’s most famous resident – the Mona Lisa. The second time, I spent most of my visit looking around the impressive collection of paintings around the Mona Lisa. I still have not seen everything but on the latter trip I did get very lost which meant I accidentally saw more than I had initially planned, including some of the museum’s collection of Near Eastern Antiquities. 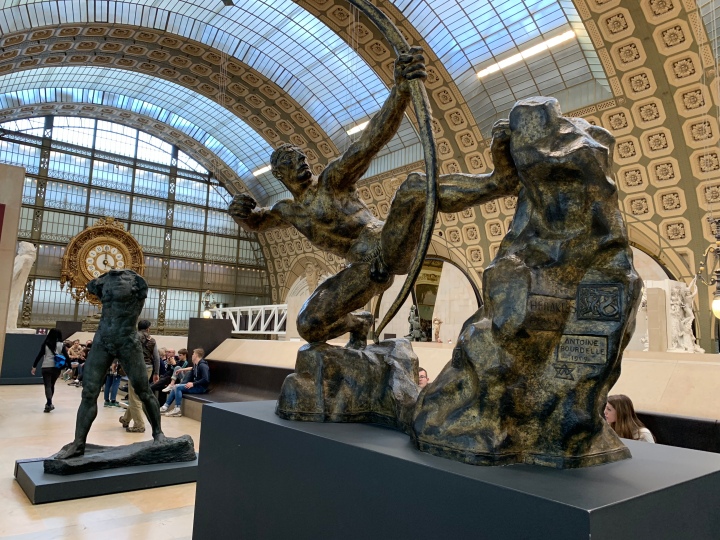 If you fancy some art that is a little bit more modern than the Louvre’s offering then the Musee d’Orsay is Paris’ obvious other option. The building that is now home to the museum used to be a railway station and is an impressive sight itself. Once you’ve finished admiring the high, arched and carved ceiling, you can start admiring the art collection which consists of both paintings and sculptures, including a number of impressionist and post-impressionist paintings by artists such as Van Gogh, Monet, Manet and Renoir. 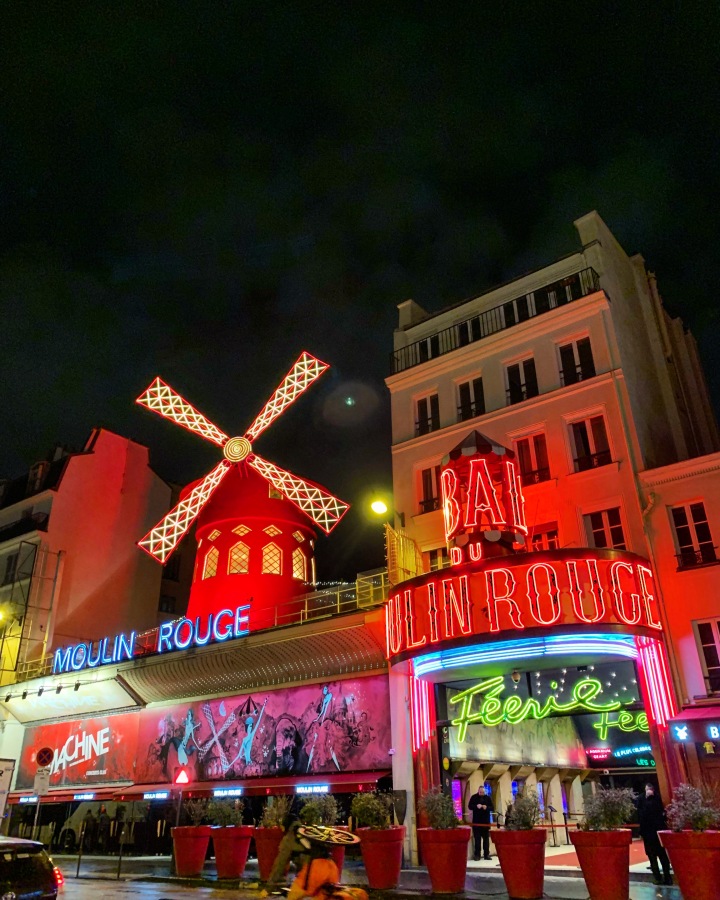 Now I’ve already told you to go to Montmartre once – Sacre Coeur to be precise – but now I am going to tell you to go again. The area isn’t just home to the famous church, it is also home to the Moulin Rouge – which you can find at one end of a road lined with sex shops and shows. Although a Moulin Rouge cabaret is on my Paris Bucket List, it is not one I have had a chance yet to tick off but seeing the venue from the outside, lit up at night, is quite cool in itself.

There are other reasons to go to Montmartre at night anyway (sex shows aside). On my last trip, I ventured passed the Moulin Rouge en route to Bouillon Pigalle, a restaurant recommended by one of my Airbnb hosts for its old-style Parisian decor and reasonably priced, tasty French food. I was warned there would be an inevitable queue but that it would move quick-ish, which thankfully it did. It was clear that this is a very popular option. 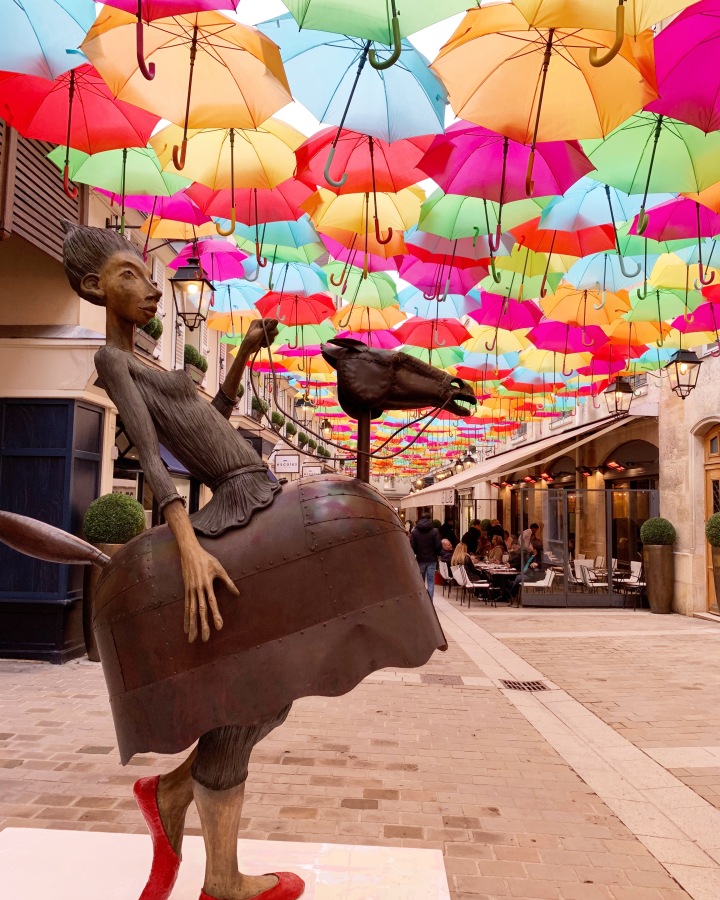 I stumbled across the umbrella covered Le Village Royal, whilst en route from the Madeleine Church to the Champs Elysees. I’d found one of these umbrella avenues during my time in Bucharest but the novelty has not worn off. This particular avenue also came with some artworks, Baby Dior and other incredibly expensive clothes shops – I just stayed for the photos.

Café de Flore is a Parisian institution. The cafe dates back to the 1880s and is known to attract celebrities as part of its clientele. Its menu is expensive but it does have some more affordable options if you just fancy a light bite – like the croissant I had on my breakfast trip, even if I did get some (jolly) judgment from the waiter for also ordering it with butter and jam.

Marie Antoinette may (or may not) have once said “Let them eat cake” but there is actually a whole array of sweat treats on offer in Paris. I focussed my latest Paris trip on macarons because, since my previous visit, I’ve developed a slight obsession with them, having not liked them for years before. I tried them at Angelina (which weren’t bad but what you really want at Angelina is the hot chocolate, which is famous and for good reason), Laduree (I wasn’t a fan of the salted caramel flavour I tried here but the french toast I had as well was probably the best I’ve ever eaten) and Pierre Herme (which is where I found the winner). Pierre Herme did have better odds than the others because I tried a variety. I wasn’t really sold by the chocolate & passionfruit or the lemon & grapefruit but the vanilla was nice and the rose, litchi & raspberry turned out to be quite possibly my favourite macaron ever. 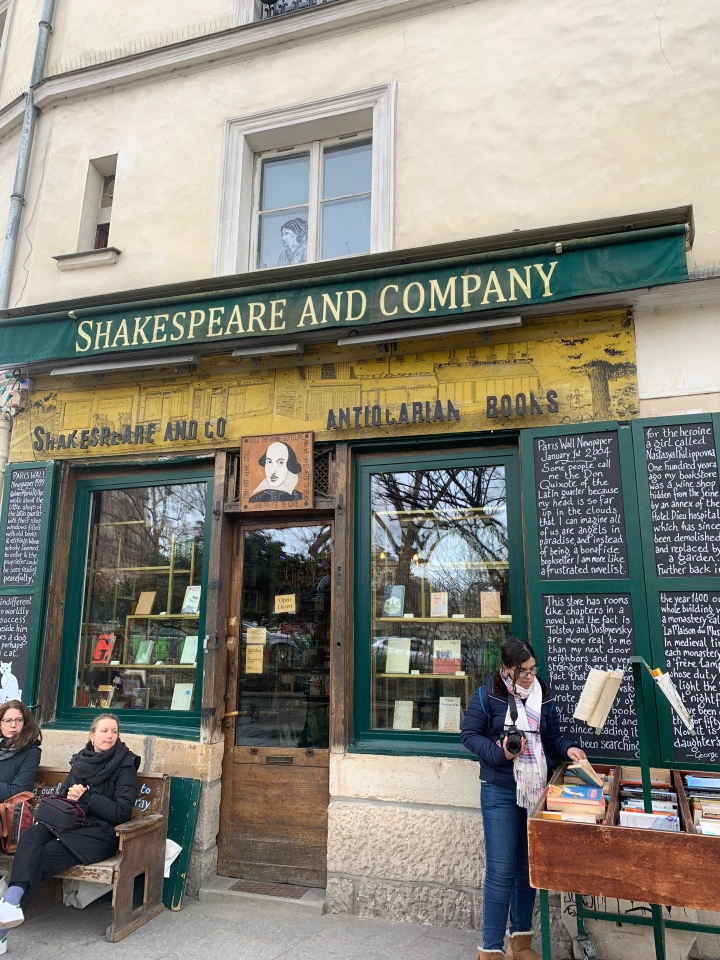 Shakespeare and Company is an English-language bookshop near Notre Dame, on the banks of the River Seine. I expected to find piles and piles of old books hidden in the dark corners of a book store with lots of twists and turns. My expectations turned out to be both right and wrong. The bookshop has a separate entrance for the rare books section and the first floor of the main shop is also filled with old leather bound books. The ground floor does indeed have twists and turns and books spilling out of every corner, however the books here are new. Perusing can be difficult as the place can have nearly as many people crammed in as it has books but that doesn’t mean it is not worth the effort.

If Paris is famous for one thing (you know, other than the art, the architecture and the food etcetc), it’s fashion. I think if you imagine shopping in Paris, your mind automatically goes to expensive designer shops and indeed if you take a stroll around places like the Champs Elysees that is what you will find but there are other options – like vintage shopping in Saint Germain. When wandering around the area, I visited the Kilo Shop, a shop completely stuffed with second hand clothes, a kilo of which you can buy for a set price. I did leave empty handed but that doesn’t mean you have to.

The Palace of Versailles isn’t quite in Paris but it is not far outside of the city and it’s an easy train ride. The palace is set amongst gardens, which are full of other buildings that are part of the royal estate. I didn’t quite get my visit right, I turned up in the afternoon during winter and bought a €18 ticket to the palace. What you need to do is turn up in the morning during spring/summer/autumn (basically when the gardens have a bit more life and colour), buy a €20 ticket that gets you into other estate buildings as well (I didn’t realise this was a thing – despite several signs – until later when I tried to get into the Petit Trianon, Marie Antoinette’s estate, and discovered I had to pay another €12) and spend the whole day at Versailles. Having said that, if all you have time for is that palace then this is by no means not worth doing on its own. I spent a good couple of hours wandering in and out of the elaborately decorated rooms, including the amazing Hall of Mirrors, which date back to the 17th century and I am glad I at least got to see this bit.

Now I know I said I had been to Paris three times but if Disneyland Paris counts then I have actually been five times – I’ve had two exclusive Disneyland trips (that didn’t involve going into the city at all). When I was a kid, I went with my family. We went during summer, stayed in one of the resort hotels, visited both parks (Disneyland Park and Walt Disney Studios Park), watched the parades and went to the shows. My latest visit in February was a bit different. I went on a day trip from the city, I overpaid because it turned out they charge a lot more on the door (although they did give me a fast pass ticket), I only went to one park and it poured with rain so the parade was cancelled and there weren’t really characters wandering around (I imagine those outfits are impossible to drag around if they are sodden).

If you can, I would recommend doing Disney the way I did it on my childhood trips but either way it is magical and although the rides are clearly aimed at children they are still fun for all, particularly the rollercoasters. On my wetter visit, there was also a fireworks show, set to Disney songs, with scenes from the movies projected onto Sleeping Beauty’s Castle. If that’s not magical then I don’t know what is.