The next morning involved another long lie-in. The room I was sleeping in had no curtains so we’d thrown up some big blankets to cover them. They worked very well. So well that they were basically black out blinds so waking up was actually pretty difficult as it was always so dark. That’s my excuse anyway and I’m sticking with it. 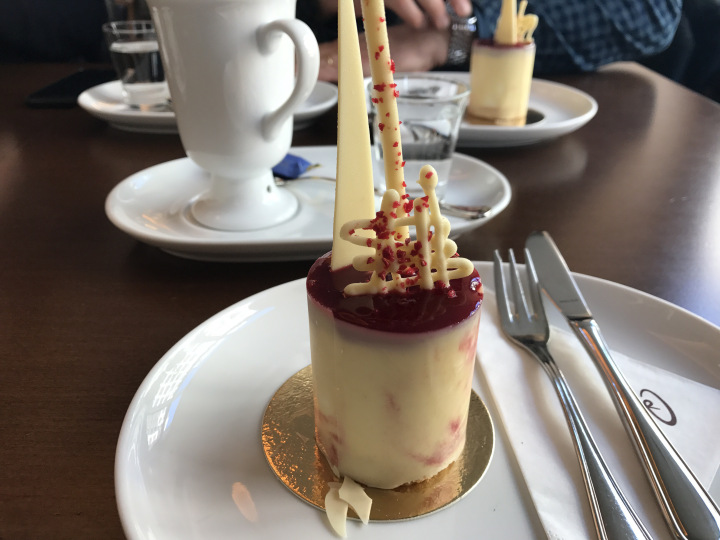 When we finally emerged, we headed for the tube station to head in the direction of Stadtmitte. Today, we were finally going where I’d been desperate to go to since my last trip to Berlin (approximately one week ago): Fassbender & Rausch chocolatiers. If you’ve read any of my past Berlin journal posts, you’ve probably noticed that I go to this place a lot. I mean, why wouldn’t you? It’s a chocolate shop with a chocolate cafe / restaurant above it. I still haven’t got round to having an actual meal there but I often go for a hot chocolate (which is so rich it is served with a shot of water) and a chocolate torte. The white chocolate and raspberry is my favourite / regular. 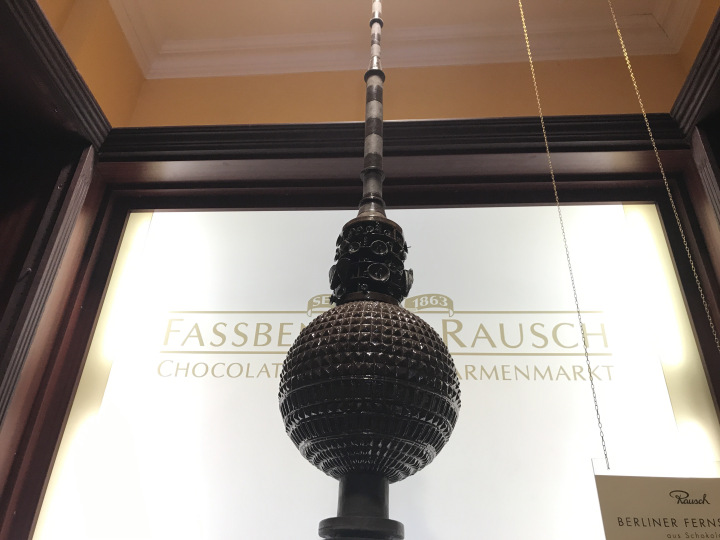 The queues can be a bit hit and miss but thankfully on this Bank Holiday Monday lunchtime, there was no queue and plenty of free tables. I’m pretty skilled in Fassbenders & Rausch by this point so we were actually in and out pretty darn quick. Although we did spend some time in the chocolate shop taking pictures of all their chocolate sculptures – they had several new Easter themed ones and a new one of the TV Tower. Apparently it took something like 300 hours to make. 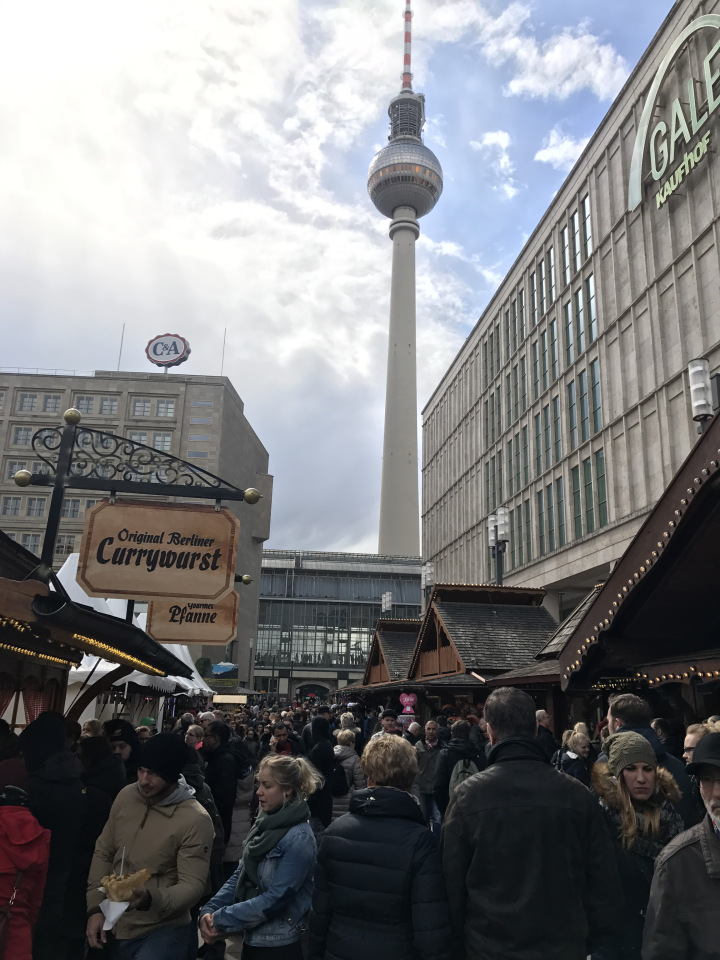 From Fassbenders at Gendarmenmarkt, we hopped back on the U Bahn and headed the short way to Alexanderplatz for the Easter market being held there – which we made it to after losing a sales guy who was trying to coax us into going base jumping from one of the nearby buildings. I am terrified of heights but also kinda stubborn so if any of my family bad been up for it then I would have been right up there with them but they didn’t so I was spared. I’m not sure if I am thankful about that or not. 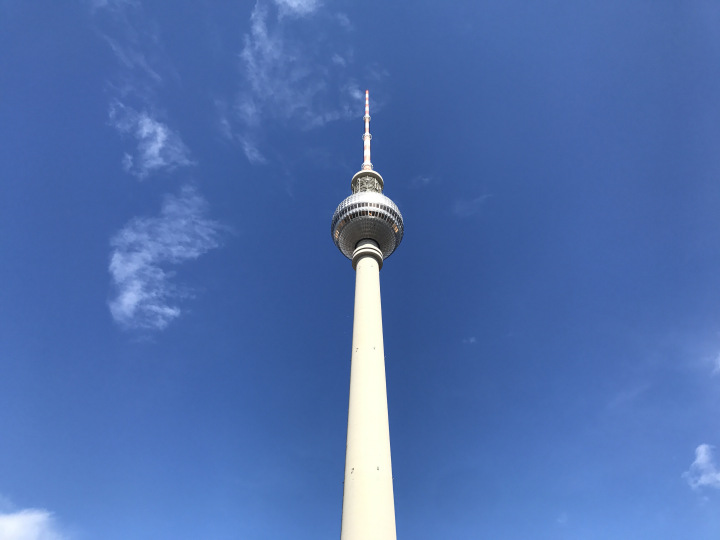 I hadn’t been a massive fan of the Christmas market on the square that I had been to a few months before and the stalls here now kind of looked similar but seemed to sell some more interesting bits and pieces. My Mum found a very pretty handmade necklace. We also relearned a lesson my Dad and I had learned (and evidently forgotten) after our Christmas market trip: don’t ever eat before going to German market. There was some seriously tasty looking meat but we were far too full of chocolate to eat it. My brother was seriously annoyed at me for that. 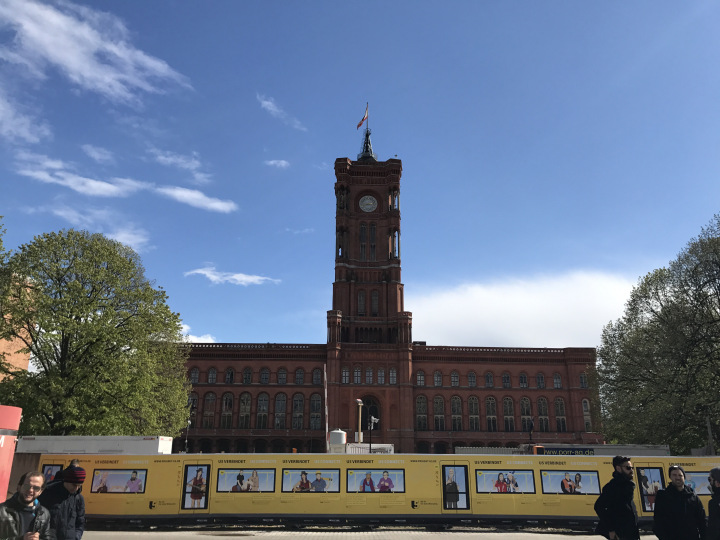 The market wasn’t particularly big (although it did have some live music going on) so we didn’t stay for long before walking in the direction of the Fernsehturm (TV Tower). My Mum loves taking photos of stuff and she wanted some good pics. After the photoshoot, we continued passed the Rotes Rathaus (Red Town Hall), stopping for another photoshoot by the Neptune Fountain opposite. 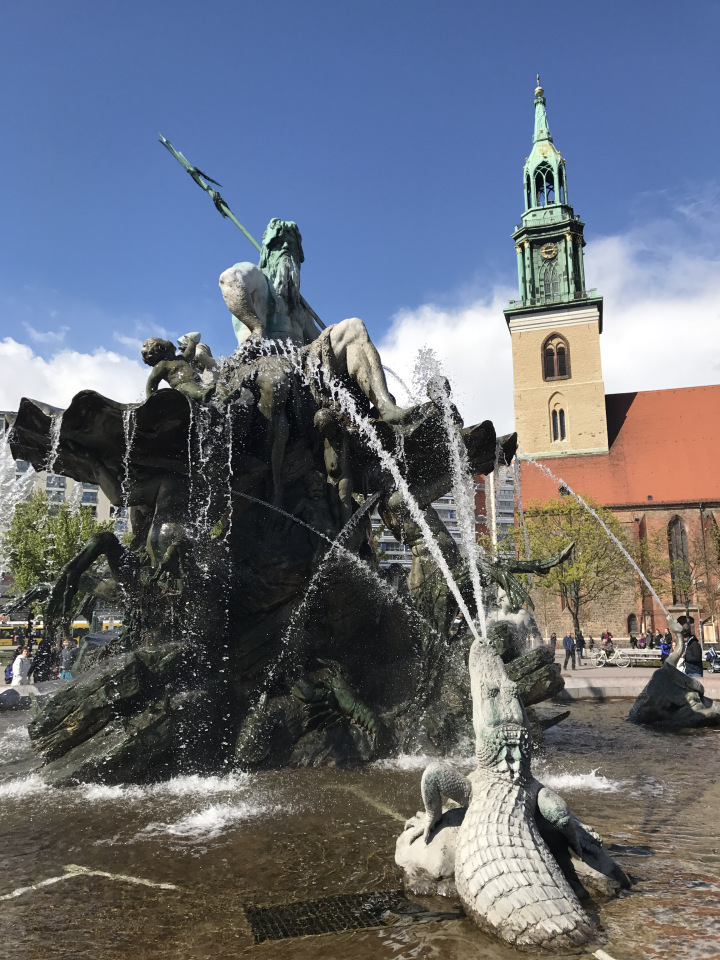 We ended up in Hackesche Höfe – a series of courtyards, surrounded by lots of art nouveau architecture. I started getting flashbacks of the Alternative Berlin free walking tour I had done a few years ago where I’d learnt about some of the local street art. I’d definitely come to the area then and found a courtyard like these but covered in street art – I just couldn’t remember where it was exactly. After voicing these memories, my Dad recognised the description so off we went again. 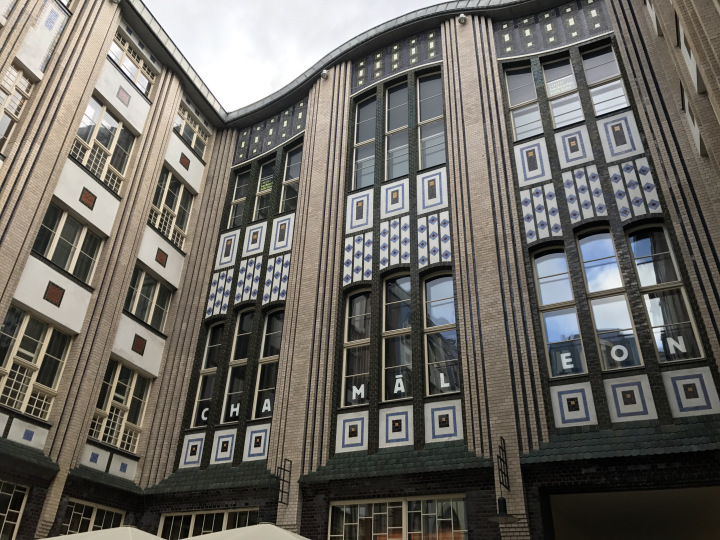 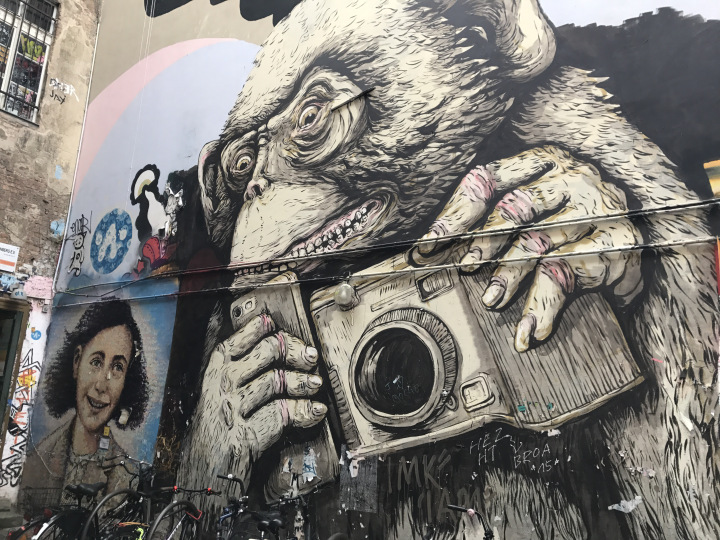 A bit further up Rosenthaler Strasse, we found the graffiti courtyard, which is surrounded by bars and exhibition spaces. One of these spaces was the Museum Blindenwerkstatt Otto Weidt – i.e. Otto Weidt’s workshop for the blind. During the Second World War, Otto Weidt employed several Jews, who were mainly blind and deaf, in his workshop, making brooms and brushes and he tried to protect them. This museum tells his story as well as those of the people he was able to help save and those of the people he could not. The museum is free and, since it is a bit off the beaten track, it was relatively quiet. 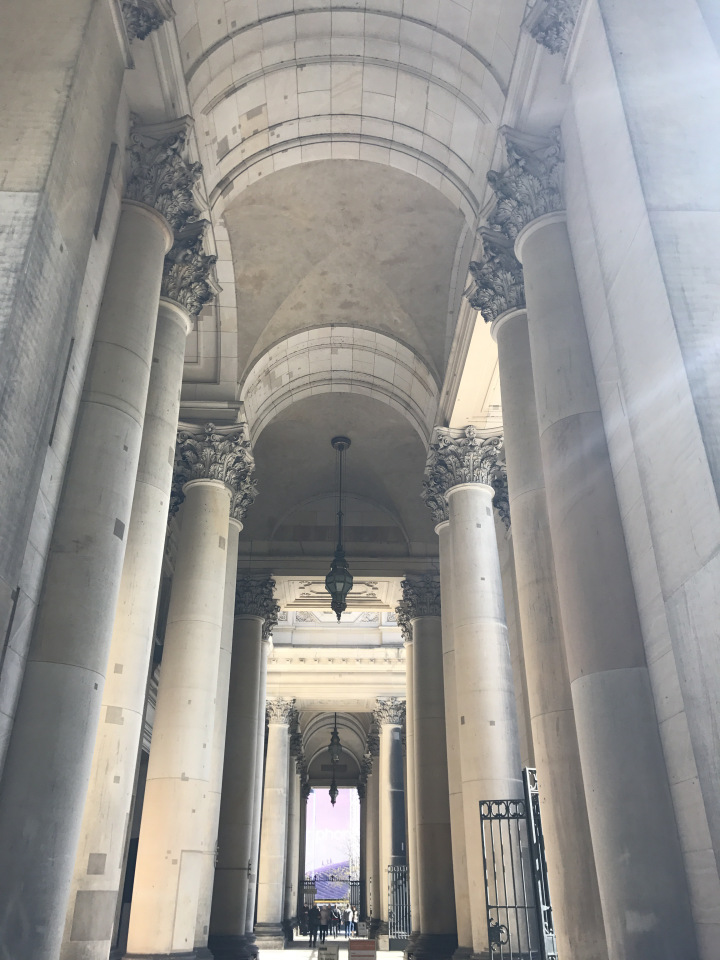 Since the museum is only small, it wasn’t too long before we were back outside again. We had planned to go to the Berliner Dom (cathedral) and actually go inside (we’d all only see it from the outside before) however on arrival we realised you had to pay to get in. It was only €7 (or €5 for a student like me) but since it was only me and my Mum who were particularly fussed we decided to come back another day. By this point it was late in the day and we wouldn’t have had long. If we came back another time we could spend some time taking in the view from the dome at the top. 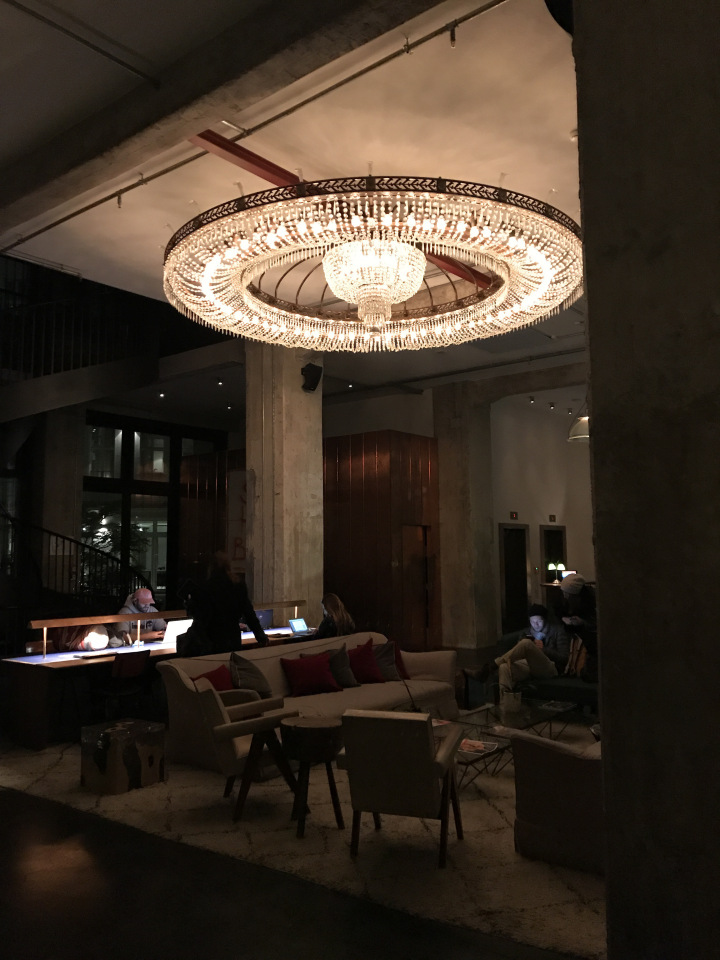 We popped back to the flat before heading out again in the direction of Mitte. This time we were off to Rosa Luxemburg Platz so that we could go to Cecconi’s in the Soho House for dinner. I’d been before with my Dad and we loved it. I know he’s recommended it several people since. I know because he always forgets the name of the place and messages me to ask. He should probably start charging the place commission. Cecconi’s is the place that serves tonnarelli cacio and pepe (which at €12 is considerably cheaper than some of the other meals on the menu), which involves pasta being presented to you INSIDE a wheel of cheese. It is then swooshed around the cheese wheel so that the sauce gets super cheesy and then served up with pepper. 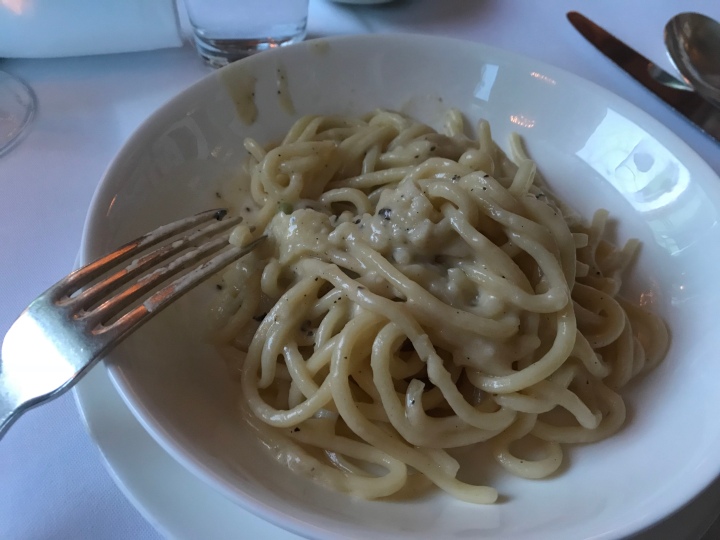 As if that wasn’t enough, I also had a huge plate of calamari to start. It was €15 but it wasn’t exactly a small portion. It was also really good – second only to my favourite ever chilli squid from Wagamama. That’s the best review I can give.

The food isn’t the only reason to visit – the building itself is beautiful. I’ve said it before but in case you haven’t read that post, I’ll say it again: it feels like an abandoned old aristocrat’s house, with its sculpted ceiling and huge chandeliers. I’m sure I won’t be done with just two visits.

The next morning brought our final full day in Berlin, which had originally been intended for shopping. A lot of places in Berlin were closed on Good Friday, Sunday and Easter Monday so Tuesday would be our best option but, as the day came, we realised there wasn’t actually much shopping that we wanted to do. Instead we once again headed in the direction of Mitte, this time to visit the Topography of Terror. 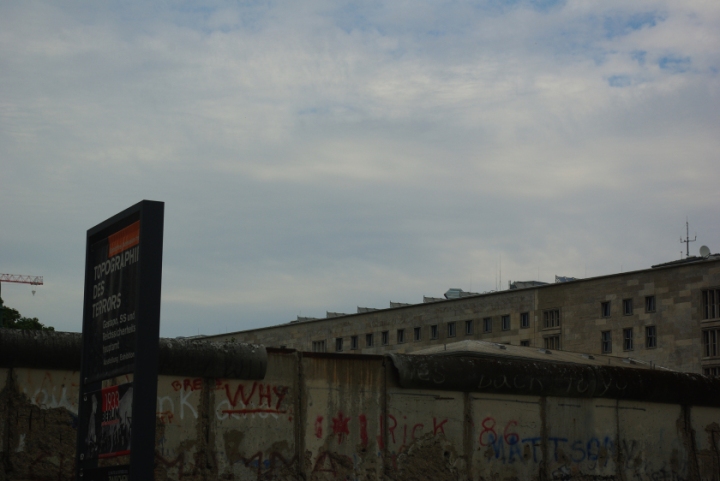 The Topography of Terror is a museum on the site of the old Gestapo HQ that documents the actions of the Nazis’ Secret Service during War War II. There is plenty of information on display and it took us a couple of hours to read everything. It was very heavy going but it is certainly a museum worth visiting. The thing that stuck with me the most were the details of how many Nazis seemed to get away with what they did, the reasons for which weren’t really explained. 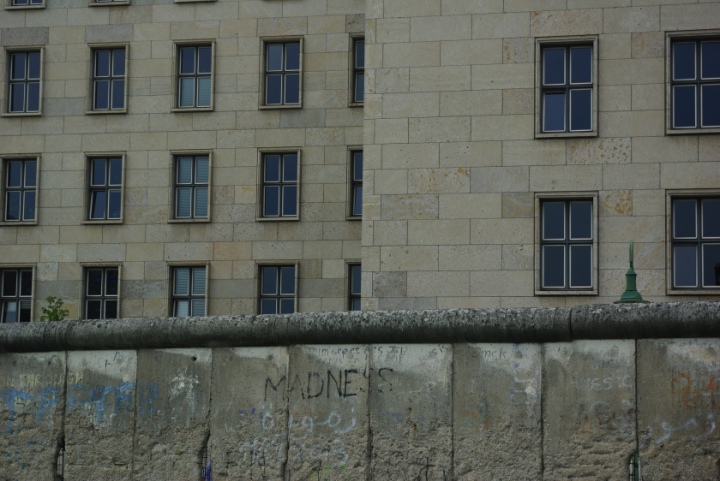 By the time we left, it was getting late in the day. We headed back to our flat via the Karstadt department store on the Kurfürstendamm. I had a nice, albeit it quite expensive, plate of food from the canteen-style buffet in the cafe on the top floor and we had a bit of a wander before walking home – held up slightly by the fact we had to shelter for a while as the heavens opened and the rain poured down.

I wasn’t feeling too well so had a bit of a sleep before dinner. That night, we went to a nearby restaurant called Franceso Forgione. This wasn’t my first visit to the place – it’s an Italian that serves homey food and is reasonably price. We had a very friendly waiter who chatted away to us as he took our order. We started with a big plate of meats and vegetables and another of asparagus covered in hollandaise sauce. It was all so good but I was particularly attached to that hollandaise sauce. Our waiter noticed and joked that he would bring me a bowl just of that sauce. At least I thought he was joking, until he returned with a jug of sauce for me to dip our leftover bread into. 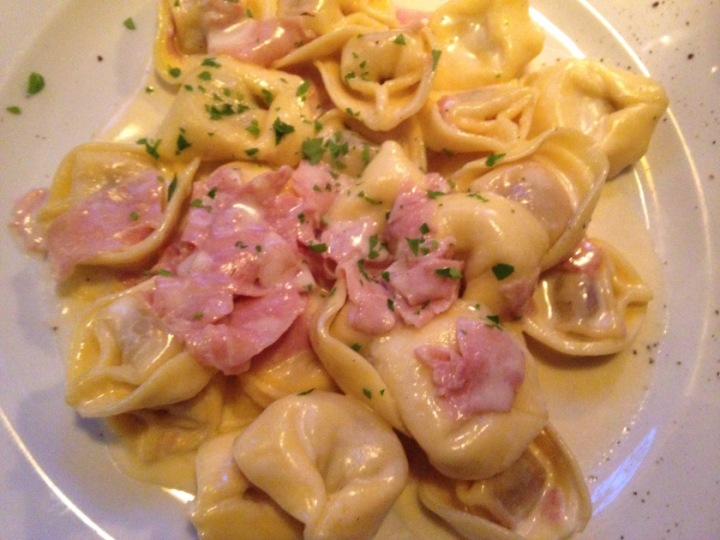 My next course was a comforting bowl of spaghetti carbonara. Perhaps not the most cultural choice for my last night in Germany but it was exactly what I was craving. I was feeling pretty full afterwards but still craving something sweet, however, since the rest my family were only in the mood for coffee, I just ordered the same. Thankfully, our waiter was apparently very perceptive as he brought me some extra amaretti biscuits instead.

With that my last day in Berlin came to an end. The next morning, I waved goodbye to my family – who would get going back to London by train – and headed for Schönefeld airport.

Read about the rest of my trip: