The journey from Vang Vieng to Luang Prabang was an unpleasantly bumpy one. Our tour group of six piled into a mini-bus along with our tour guide and the driver. Since there were three sets of three seats in the back, we divided into pairs and sprawled across them.  I get car sick at the best of times and, as we swung around mountain corner after mountain corner, I could barely sit up straight. In fact, I couldn’t sit up at all – I had to lay across the seats with my travel buddy holding onto me, acting as a seatbelt to stop me from falling off. In that position, the ride was much more comfortable. I think I even dozed off. 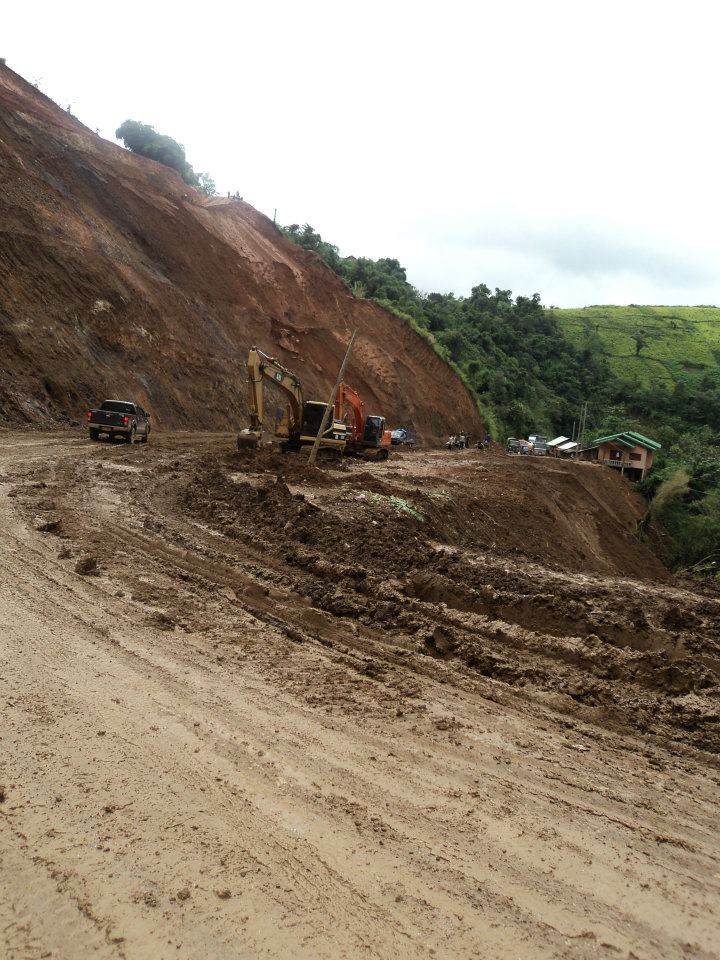 As it was monsoon season, there were several landslides that had blocked the mountain roads. The local authorities were already dealing with the mud but, every now and again, we’d come across a patch that had yet to be dealt with. Instead of taking his time to slowly move across it, our driver’s method of getting past was to slam his foot down on the accelerator. The van would lurch forwards, skid a bit on the mud, heading towards the edge of the cliff, before the driver dragged back into place. It was a nerve-wracking method but it seemed to do the trick and we were able to carry on with our journey. 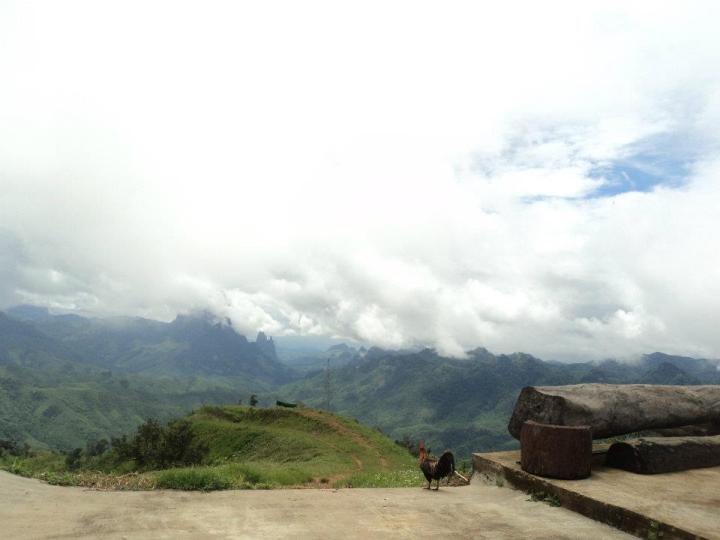 It was a seven hour journey, with one stop off at a restaurant in the middle of nowhere with some amazing views. Later, we finally arrived in Luang Prabang and I could not have been happier to get off that bus.

After checking into the Malida Guesthouse, we all went for a wander through the night market and down to a bar on the edge of the river. We stayed for a drink before heading to dinner at the Lao Gardens restaurant, where we were able to cook our own bbq dinner at our table. We were given a hot metal dish to cook the meat on, with the vegetable being cooked in water along the rim – along with an egg. Sadly I was still not feeling great and the smoke emanating from the bbq was not helping. I couldn’t eat nearly as much as I would have liked, which was a real shame because it was all delicious, particularly the water buffalo.

We went back to our hotel via the market but, annoyingly, I didn’t have enough money to make any purchases. Helpfully, I did at least find a cash machine where I could stock up, so that I was ready to revisit the market the next day. 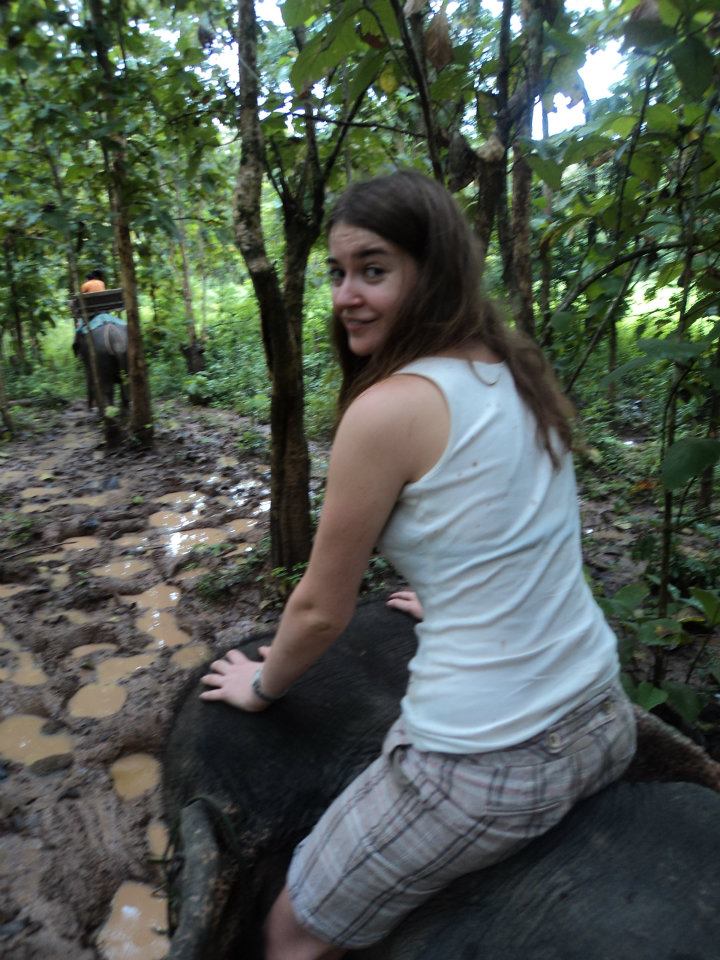 The next day, half of our group – me included – got up early to go elephant riding. We were to visit the Luang Prabang Elephant Village, which our guide had recommended. It was probably a more expensive option but if you are going to go elephant riding, you should make sure you go to somewhere good. The elephants are not always treated well. The place we were visiting was a sanctuary which re-homed elephants that had previously been used in the logging industry. They had been beaten and many still held the scars. Now at the sanctuary, they were treated much better and took tourists for rides in order to earn their keep.

After our eggs breakfast, we were picked up at about 8.40am and taken to the other side of the river and up onto a ledge from which we could mount our elephants; mine was called Mae San. Each elephant had a handler – a mahout – who rode on its neck whilst we sat in a bench strapped to its back. It was an amazing experience, if perhaps a little unnerving as we walked up a very muddy hill. After a little while, we changed positions so we could each ride upfront. It felt more unstable than it probably was and we posed for some photos before heading back to feed the elephants bananas. 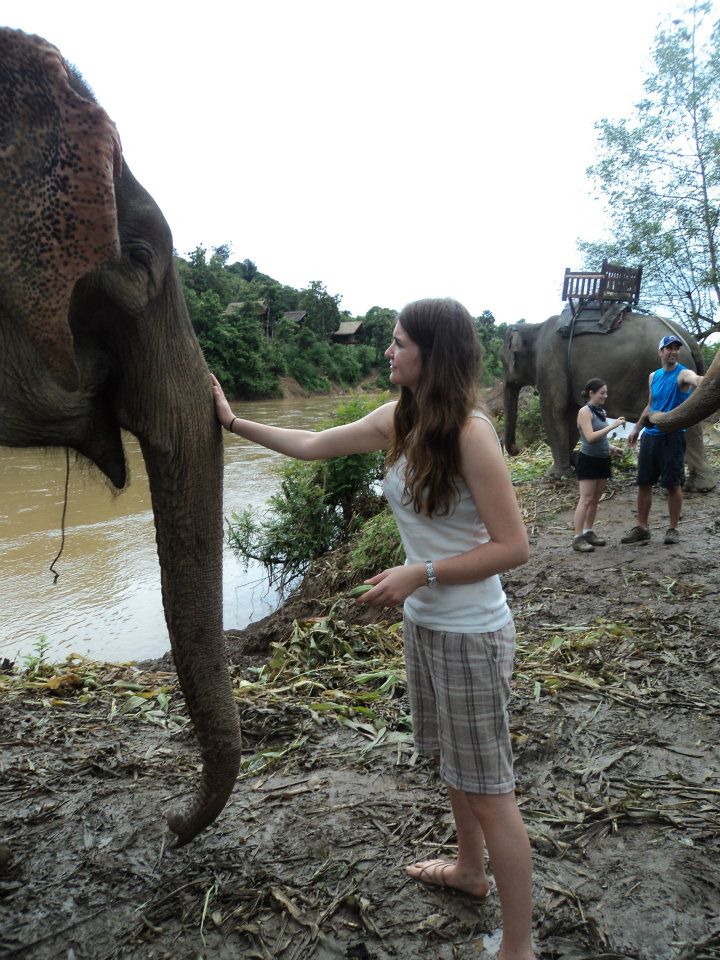 After bidding our new elephant friends goodbye, we climbed back into the boat and sailed upstream to the Tad Sei waterfall, parts of which we were allowed to play around in before we headed back to the sanctuary for lunch. I’m not entirely sure what it was that we ate but it tasted good. Booklets had been placed on the tables which told us about the village and its elephants. It turned out many of them were blind as a result of their logging work.Mae San had been stabbed and drugged. 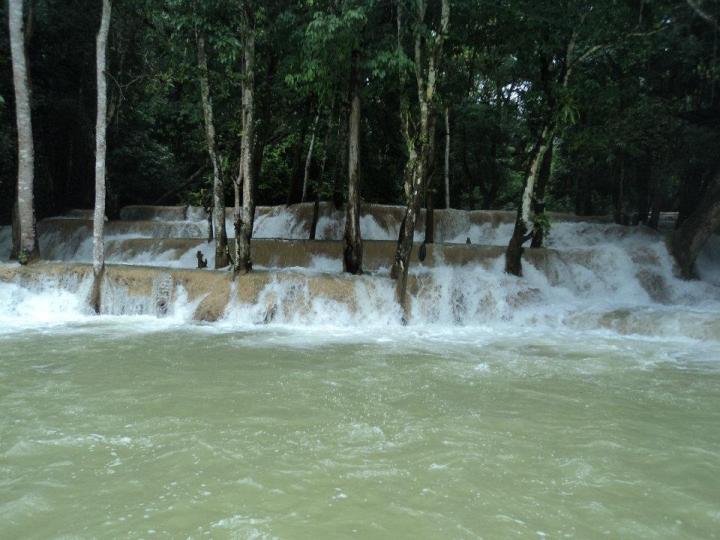 We did have the option of spending a whole day at the Elephant Village and bathing the elephants in the afternoon. However, since we didn’t have long in Luang Prabang, we headed back so that we could join the rest of our tour group who were going to rent motorbikes and ride down to the Kuang Si waterfall. It was a shame to leave the elephants earlier than absolutely necessary but it is not a decision that I regret.

We started off on a slightly muddy road with a few treacherous potholes. All of a sudden, I saw one girl’s legs fly up into the air has she hit one and flew over her handlebars. Thankfully, she was okay but our guide took her to the hospital to get patched up, leaving us to complete the rest of the journey alone. 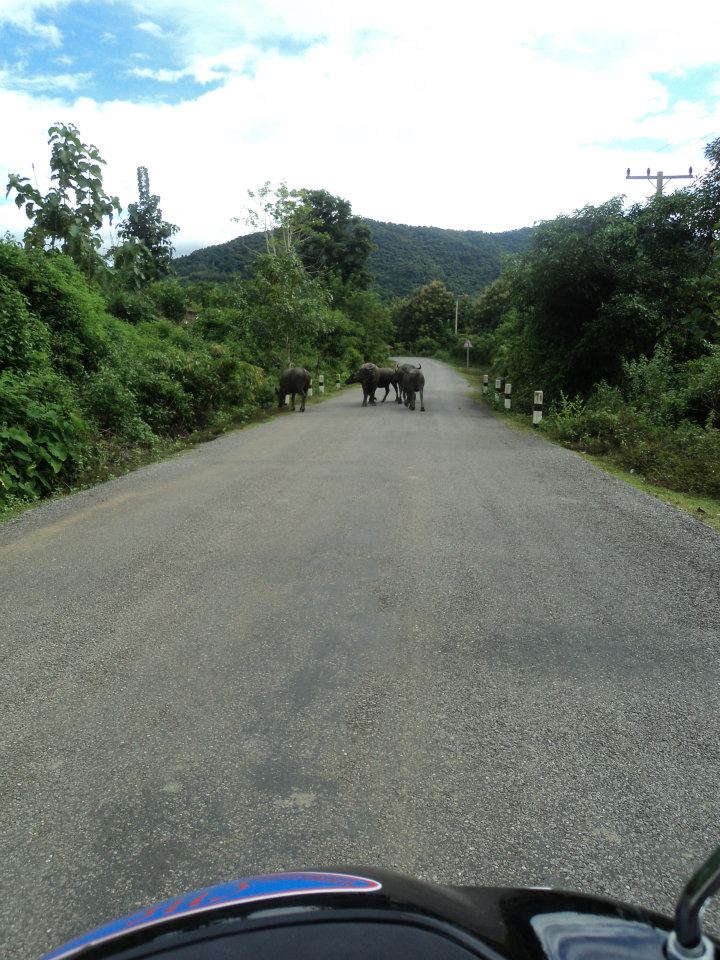 As we turned onto the next road, we found that, for once, it was actually in very good condition. Unlike our bike ride in Vang Vieng, I could now actually enjoy this one. As we whizzed along at varying speeds, we all got separated along the road. I turned a corner to find that a group of water buffalo had spread themselves out across the road. I was unsure of what to do next. I could try and sneak past but, if they charged, I didn’t think I could turn my bike around in time. If I turned back, there was a good chance that I would get lost, knowing me, and no one would know where I’d gone. Besides, I wanted to see the waterfall. I figured I’d take the risk and I waited for them to move over slightly before slowly moving past them. It turned out that they were not even remotely interested in me.

Finally arriving at our destination, we grabbed a sandwich and headed to the waterfall, through a bear rescue centre. After a dog stole my mayonnaise-filled sandwich wrapper out of a bin,  we carried on to the falls. We were debating whether we should take the opportunity for a swim when we heard thunder overhead. The heavens opened and the rain suddenly poured down. We sheltered until it had eased up a little and took the chance to get back to our bikes, which thankfully all seemed to still work after their soaking. Somewhat annoyingly, our upside down helmets had completely filled with water. 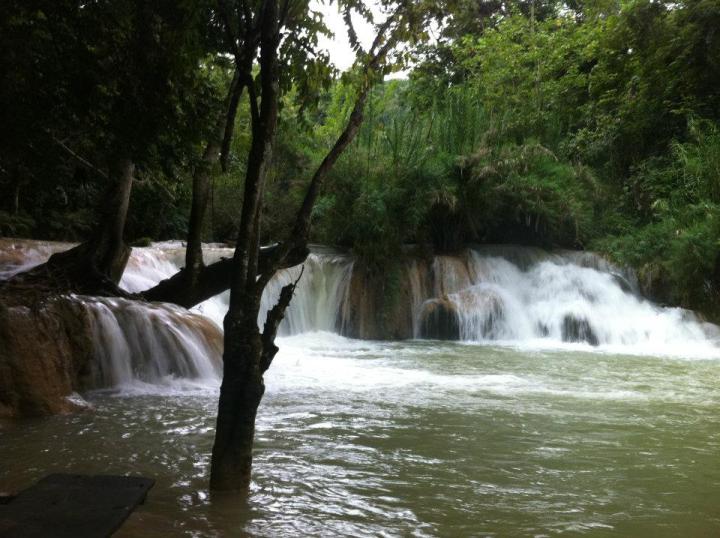 As we set off, we bumped into our tour guide who had come back to find us. We stopped on a slope to talk to him, balancing our bikes beneath us. As I put my foot down to help steady myself, my wet sandal strap snapped, meaning that I had to drive back barefoot. I was slightly nervous as my brake was stiff anyway and the roads were wet but thankfully they dried quickly in the heat as the sun emerged. Just a tip for any potential bike-riders here, don’t go biking in sandals if you can help it. I don’t know why I did, I had Converse back in my hotel room and everything.

As there were no more tour activities planned for the day, we had the evening free. A group of us headed down to the night market, to make up for all the shopping opportunities missed the night before. There we found a little alleyway full of cheap foot stalls, where we could fill up a plate with food for next to nothing. Even though some of the meats did look good, I was a little nervous about getting ill so stuck to the vegetable options. It all tasted good though so that was not a problem. We then went souvenir-shopping. I also managed to pick up some new flip flops.

Read about the rest of my trip: